Windmill’s 2020 season set to be biggest ever

Today we’re thrilled to announce our 2020 live theatre season, including a brand new work about the creation of the universe, a regional tour for a robot, and the 10th anniversary return of a fan favourite.

With two seasons in Adelaide, a South Australian regional tour, plus tours of Australia, China, the United States and Canada, 2020 will see more than 300 live theatre performances from our repertoire across 51 cities and towns worldwide, marking the highest number of shows we’ve delivered in a one-year period.

Co-creator Roslyn Oades has spent the last few months asking the general public what big questions they would like answered, from ‘how did we get here’ and ‘what is the meaning of life’ to ‘is it possible to lick your elbow’. This process has taken our intrepid team from schools to nursing homes, interviewing scientists, spiritual leaders, grandparents, children and many others around Adelaide.

These recorded interviews will form the backbone for the show that will see two of Windmill’s favourite artists, Jonathon Oxlade (Rumpelstiltskin, School Dance) and Fleur Elise Noble (independent work Rooman) attempt to answer these burning questions using any means at their disposal. These unreliable experts will build, battle and brawl on stage as they tackle everything from the big bang to the afterlife and many conundrums in between.

Directed by Rosemary Myers, this creation about creation is a big hearted and hilarious escapade for the whole family that guarantees your most baffling questions answered… sort of. 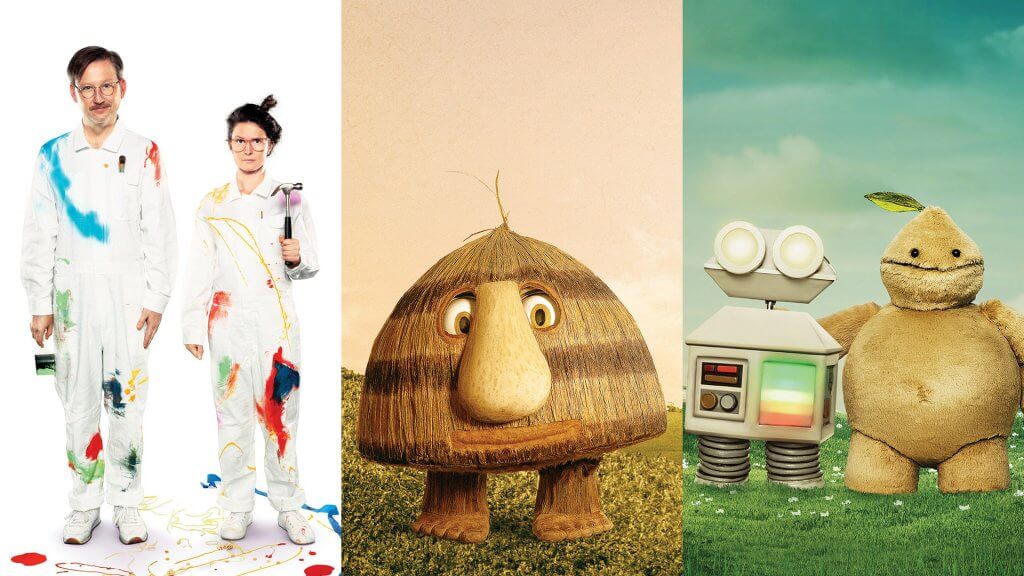 In October a whole new generation of our youngest theatre goers will have the chance to experience Ted Prior’s hugely popular picture book character Grug come to life on stage.

Celebrating 10 years of performances in 2020, Windmill’s award-winning Grug returns to Adelaide for the first time since 2013, having played to more than 50,000 children and families across Australia, Scotland, Canada, the United States, Hong Kong and China.

Directed by Sam Haren and featuring an inventive set design from Jonathon Oxlade, Grug will also be performing at La Boite Theatre Company and HOTA in Queensland in June/July, before heading across Western Australian from August.

Windmill returns to outer metropolitan and regional South Australia with their latest offering for pre-school age groups, Beep. After huge critical acclaim, a sell-out season at the DreamBIG Children’s Festival and successful runs at Sydney Opera House and Arts Centre Melbourne in 2019, Beep will be performing in the Barossa, Elizabeth, Noarlunga, Port Pirie, Port Augusta, Whyalla and Goolwa.

From co-creators Sam Haren, Jonathon Oxlade and Katherine Fyffe, Beep has proven to be one of Windmill’s most popular shows with touring venues, and will be spending much of 2020 on the road with a 12 week tour of the US and Canada in the first half of the year, and a nine week tour of Australia’s east coast.

BABA YAGA HEADS BACK TO CHINA

Windmill will also return to China with Baba Yaga for a second time in two years. After a successful tour to Beijing, Xi’an and Hangzhou in July 2019, our friends at Art Space for Kids (A.S.K.) can’t get enough of Vaselina and the terrifying top floor resident.

Co-commissioned by Imaginate in Scotland and from the combined creative minds of Christine Johnston, Rosemary Myers and Shona Reppe, this tour will see the show visit three cities, including Shanghai.

Windmill Artistic Director Rosemary Myers says “We’re so excited for everything we have planned for 2020, from a one-of-a-kind, adventurous new work to celebrating 10 years with our much-loved Grug.”

“We’ve been deep in the throws of development on Creation Creation and it’s incredible to see what this talented and imaginative creative team is bringing to the stage. It’s possibly our most unique and hilarious play to date.”